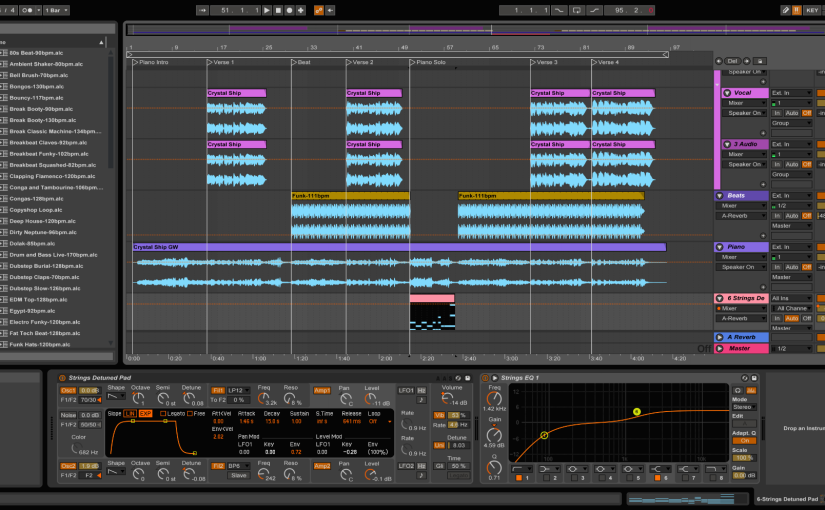 So what prompted this rare musical effort on my behalf was a long overdue penny drop with Ableton DAW. I’ve been a Cubase man for years but have been keen in recent times to get into electronic music and after some research all roads seemed to lead to Ableton when it comes to modern electronic music production..

I tried a few times over the last few years to learn Ableton, mostly through random YouTube videos and it’s own help section and manual but every time I opened it up to do something I still had no clue where to start! Cue a proper, structured online course from Lynda.com and I now know enough (no expert at all) about it to actually attempt something like this mashup.

My plan with my early stage electronic music composing and production career is to aim to create electronica, ambient, slow and moody music with the computer. These days I listen to stuff like AIR, Kraftwerk, Zero 7 etc… but to also somehow include my old influences of 60’s Classic rock for that retro feel. That lead me to try import some samples into Ableton and use them in tracks and then in turn to try create a full mashup of a couple of different toons so I set off to YouTube to search for isolated Jim Morrison/Doors vocals. There are lots surprisingly! As soon as I found good quality Crystal Ship vocals an idea sprang to mind to try combine that with a solo piano version from a George Winston album I’ve had for a few years. The Crystal Ship is possibly one of my favourite Doors songs:

Here’s how I did it all in the end:

As I said above I ran across some really good quality Jim Morrison vocal isolations on Youtube including this one which I extracted the audio from:

Then I also extracted the audio from George Winston’s solo piano version of the same song from his awesome album of Doors covers – “Night Divides the Day“.

I then setup a new project in Ableton and matched the tempo to the original Doors version of Crystal Ship by tapping the beat out.

I attempted to warp the vocal to the project tempo but quickly realised that a vocal is not nearly as easy to warp as a drum beat or rhythmical sound as it has fairly random peaks and hitpoints but I eventually managed a good approximation after hours of tweaking.

I done the same warping with the solo piano track. This was a little easier as there was a bit more rhythm although there are some dynamics and speed fluctuations in both the vocal and piano performances that I had to iron out. They will be very obvious to people who know this song but all in all I think it flows well and stays true to the original song.

With both tracks matched to the project tempo all I had to do then was to match them to each other. Both arrangements are similar in terms of verse, chorus etc but the piano meanders a little longer in parts so I just chopped up the vocal to match the piano parts and aligned them accordingly.

I looked through Ableton’s library for a suitable beat to apply after having thought long and hard about whether to “modernise” an old song in this way by adding a modern beat! I eventually settled on a fairly sparse Funk beat and only applied it well into the song, stopping it for the piano solo in the middle. I think it works fairly well personally but I’m sure there are many purists who wont!

Just for practice and because I felt there needed to be something else alongside the piano solo in the middle I added some MIDI strings and automated the volume to be louder at the beginning and end, just like the piano itself.

The last steps were to add some EQ to each track and send each track some Reverb as well as adding some Compression and Limiting on the master track. I decided to duplicate Jim’s vocal and pan each one left and right to give his vocal a  little more impact too.

I also added some video of Jim Morrison just so I could get the track up on YouTube!

Let me know what you think in the comments. Be kind, it’s my first proper project in Ableton and first mashup ever!