Came across this handy reference guide for Photoshop CS6.

Print it out and stick it on your wall or desk!

Adding shadows to simple objects in Photoshop is no big deal but adding them to irregular objects like people with awkward stances can be a bit tricky. Here I outline simply how I normally do it.

A decent hi-res image of a person against a neutral, single colour background.

I bring my image of a girl into Photoshop and cut her out of her background using the Pen tool. I’ve just started using Vector Masks so when finished tracing her outline with the Pen, right-click inside the outline and select “Create Vector Mask”. Make sure you’re not working on a background layer for this. Creating the Vector Mask will automatically cut out the object and leave the rest of the image transparent which is what we need here. The benefit of using a Vector Mask is that you can go back and adjust the Path/Shape at a later stage. Handy sometimes.

Once the girl is cut out, I duplicate her layer and rasterize it to remove the vector mask then using the Transform – Skew or Distort tool, I drag the duplicated layer to the rough angle and shape that her shadow would be, paying particular attention to the light source in the photo. Once you’re happy with that, darken this layer totally using Hue/Saturation. You might find after Transforming that the feet don’t line up properly with the shadow so using Transform – Warp, drag things back into line.

Finally some tidying up around the feet in the original layer where they meet an invisible floor by painting in some under-shoe shadow on a new layer with a very soft Black Brush. Change the opacity on both this and the shadow layer to about 85% to soften a little.

And yes, it is more fun to work on images of sexy girls..

Spotted an awesome ‘very’ hi-res image of the Curiosity Rover on Mars on Facebook last week, downloaded it and set it aside to do some Photoshop trickery on it. Here’s what I came up with, a movie poster effect with Aliens V’s Curiosity!

I first imported the 4 Alien pics and cut them out of their background using the Magic Wand tool. Next I dragged them to the main Curiosity pic and played around with locations that best suited their lighting, shape, size and angle. I then used the Free Transform tool to resize them. Next, I selected each Alien in turn and added both Hue & Saturation and Levels adjustment layers to their shapes and messed with colours and levels to blend them in with the surroundings a bit better.

I decided to add a fake sun top right of the pic to add a bit of lighting drama and that was achieved by drawing a white circle, blurring it, adding a glow effect then using Filter – Render – Lighting Effects on the main Curiosity layer to shine a spotlight down from the suns location.

With the light source firmly established, it was then time for some shadow. For any aliens that needed shadows, I duplicated the main alien layer, flipped the duplicate vertically, darkened & blurred it then used the Free Transform tool to mold the shadow to the required shape and angle depending on the light source. The middle, air born alien’s shadow cast over the rover was trickiest but it turned out ok’ish using a combination of simple Brush darkening, Displacement Maps and Layer Masking. I used Layer Masking again to make the middle alien appear to be behind the rover simply by erasing out his legs around the rover’s shape.

Next it was time for some touching up on the aliens, mostly using a soft Brush on an Overlay layer with lowered Opacity to add shadows and highlights with black & white colours. I used the alien layers masks to fade out their edges a bit where the sun hit them, especially the middle alien.

Finally I added a Photo Filter adjustment layer with a colour sampled from the Martian landscape on top of everything to bring all the composition together. Hope you like it.

Click the final image below to view a hi-res version and don’t forget to zoom right in!

Seen some pics of eggs on the net today, can’t remember how or why, followed closely by some story about star birth or some such thing. Decided to put the two together and come up with this composition..as you do.

I once read a book called “Is Anyone Out There” by Frank Drake and Dava Sobel which was all about SETI (the Search For Extra-Terrestrial Intelligence) and in it Frank Drake came up with an equation which estimates the possiblilities of there being other advanced civilisations in the universe. Here’s the equation:

If you do the maths, it’s nearly impossible to believe we could be alone in the universe, there’s simply too many stars and systems like our own that could support life. For us to be the only one is unthinkable! Fascinating really..

I first cut the earth out of it’s background and dragged it into the eggs photo then used the Transform – Warp tool to match the existing yolk shape in the broken egg. I then added  a layer mask to the earth and cut out the parts of it with the Pen tool that overlaid the egg shell to make it look like it fitted inside the shell properly. I needed to lower the transparency of the earth layer to see where I was going doing these.

Next on the earth layer I used Layer Blending Options on the ‘underlying layer’ to bring out the shine on the egg yoke and make it look like it was on the earth too. Adjusting the layer blending also helped with blending the colours and features of the earth onto the egg yolk underneath.

I then added a glow on the earth to mimic the light source on the other eggs via Selection – Fill with white – Gaussian Blur. A new ‘overlay’ shadow layer using the Brush tool was needed to add a little shadow around the top and left of the earth from the egg shell.

Some fine adjustments using the Blur tool on the earth edge and here’s the finished article:

Just thought I’d apply my old 3D (Stereoscopic, Red & Cyan) Photoshop technique to the latest photos coming from the Curiosity rover on Mars. It”s been for a spin and left some tracks! Obviously I couldn’t be there to take the proper pics you need to for creating 3D composites so I messed with perspective a bit in photoshop instead. Not quite as good but decent.

Get your glasses on and see below. Focus on the rock left of center:

A quick head cutout and swivel for the popular Buddy Jesus then overlay of the famous Spanish Fresco job!

Next, I added a glow effect at the bottom right as in the original simply by using a round marquee selection filled with white and with much Gaussian Blur applied. I then set this layer to Overlay and lowered Opacity to 75%. I manually drew in some white blemishes/scuffs around this area to match the original and faded them out a bit via Opacity.

Next I added the text in the same area and at the same size and colours as the original book. I then cut the male symbol out of it’s background with the Pen tool and placed it in the composition, duplicating it and positioning both symbols between the text in a similar position to the original cover’s tie. I edited the symbol colours slightly to match the background and then added shadows under both by duplicating the symbol layers and changing lightness to fully dark and applying Gaussian Blur. I manually drew in some further shadows under the top symbol to make it sit on the bottom one a bit better.

A topical Photo Composition this time…as always, the shit weather in Ireland is a hot topic so here’s a montage suggesting we all drown our weather sorrows! 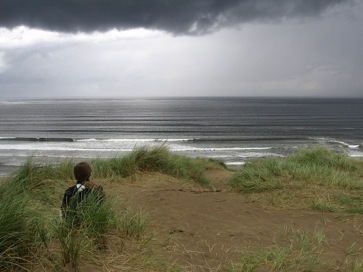 The beach shot was my base layer so I cut out the Glass and Post from their respective backgrounds using the Pen Tool and copied them into the beach pic, placed and sized appropriately. I duplicated the post a couple of times and spaced them out to simulate a fence type situation, editing each one with the Spot Healing, Clone and Burn/Dodge Tools to make them look different.

Next, I masked the glass and chose a 50% opaque brush and brushed out the middle of it so you could see the sea/sky background behind it. I then duplicated the beach layer and chose Filter – Liquify to warp the sea and sky behind the glass (I grabbed a wine glass from the drinks cabinet to check how a glass distorts things for this step!). I then added 2 new layers, set them to Overlay blending mode and manually painted in blue sky and sea behind the glass, using Hue/Saturation sliders to edit the colours a bit. I then manually drew in shadow under the glass to ground it on the post a bit.

I couldn’t find a decent rainy beach shot so I added my own rain next! I added 2 ‘Rain’ layers, both just black filled with slightly different settings for Noise and Blur filters then set both to Screen blending mode. I then used the layer opacity sliders to adjust them against each other slightly.

To add to the misery of the shot, I decided to make everything Black and White. Whenever I do this I always add 2 Hue/Saturation Adjustment layers on top of the colored image, bring the saturation right down on the top one and go in and edit the Lightness for each colour channel separately on the bottom one. That just gives better control over the tone than using Image – Mode – Grayscale.

Finally, I added a vignette cause I’m mad for them at the minute and some touching up here and there, specifically using the Dodge tool to brighten the tops of posts to suggest wetness and here’s the finished composition:

NASA might need to look a little closer at one of those first images from the Curiosity Mars rover landed today. Might not have taken as long as expected to find life..LOOK OUT BEHIND YOU.

Hi-res Teacup photo from sxc.hu.
Some hi-res Cloud Brushes for Photoshop from http://www.brusheezy.com/brushes/2187-24-clouds

The teacup photo was rotated so I leveled that and started to paint in different sized random cloud shapes on different layers inside it. I then masked each brush layer to merge them a bit better. I added several white glow fx behind the clouds at points where they joined or had natural brightness simply by drawing circles with the Selection Tool, filling with white and applying a Gaussian Blur and Glow effect.

Next, I copied all cloud brush layers and merged to one, moved it below all other layers, darkened and applied a Gaussian blur to simulate cloud shadows on the inner sides of the cup. I drew in some more shadows manually with the Brush, particularly at the bottom of the clouds.

Finally I drew in some Lightening strikes with the Pen Tool around the lighter areas I’d created earlier, chose a suitable size Brush & colour and Stroked the paths with “Simulated Pressure” ticked. I added Blur and Glow and adjusted the Layer Blending mode slightly to make the lightening look a little more realistic.